The Special Needs Talent Showcase, which started in 2015, has always been a highlight for many of our talented individuals with special needs, as well as for those who have supported this event throughout the years. This competition motivates and encourages our special-needs individuals to work hard for something they really want to achieve. It brings hope and helps fulfill their dream of being in the spotlight. It also plays an integral role in bringing awareness to others about the special needs community, dispelling stigma and stereotypes and opening up employment opportunities.

The audition for the competition was held at the FCSN Fremont Center back in January, and the final competition was supposed to be held back in March. Usually this event gathers 600 people at the Santa Clara Convention Center to watch all the talented finalists compete for the top 3 spots. Unfortunately, this year, due to the COVID-19 pandemic, we had to postpone the competition, with hopes that we could host the event in a few months at the convention center; however, the pandemic continued with no end in sight. Not wanting to disappoint all the finalists who had already auditioned back in January, we decided to try hosting this competition live via Zoom on August 22– something that we had never done before.

Planning the event live via Zoom was a new idea to us, so it posed some challenges. After all, the atmosphere of a virtual meeting differs greatly from that of a live competition at the Santa Clara Convention Center, packed full of enthusiastic audience members. How do we drum up excitement during a Zoom event? How do we keep the attendees engaged throughout the event? How do we get all the finalists to perform for the competition while social distancing? How do we make sure all the transitions during the show are smooth? Those were just some of the questions that were swimming in our heads, but very soon, many ideas started developing among the talent show committee team.

One of the main concerns we had was how to make sure the finalists could perform safely for the competition. After much thought for the safety and health of our finalists and families, we decided to pre-record the finalist performance ahead of the final competition. Each finalist individual or group was asked to come to the FCSN Fremont Center at a certain date and time so they could be recorded by the talent show committee. To make it fair for all the finalists, all the final performances were only recorded once. Those would be the videos we broadcast during the live show.

After 2 months of hard work in planning and preparing for the event, it was finally showtime. The show started off with a video introducing our 10 finalists. Then, our ever-popular master of ceremonies, Matt Keller, invited Anna Wang, the chairman of the event, to say a few words.

Keller then introduced this year’s incredible judge lineup. Besides our returning judges from previous years (Chris Showerman, Hollywood actor; Kansen Chu, California Assembly member; Mimi Kwan, Vice-President of Community Affairs at ABC7 and Nancy Bargmann, Executive Director of Department of Developmental Services,) we had two new international judges: Judge Morrow from Ireland and Angela Inkyung Sohn from South Korea. Jude Morrow, diagnosed with autism at age 11, is the author of Amazon best-selling memoir “Why Does Daddy Always Look So Sad?”, and Angela Sohn is the founder and conductor of the Onnuri Sarang Chamber of Orchestra.

Finally, the competition began. Keller introduced the finalists individually and spoke with them prior to the broadcast of their respective performance videos.The 10 finalist performances were:

● Julian Huang and Alice Jen with a piano duet of “Sebra Dance” by Aran Khachaturian
● Frank Prenot’s Drum and Vocal on “We’re Not Gonna Take It” by Twisted Sisters
● Yeah Jin Choi with the Korean Traditional Fan Dance
● Christian Magoon singing “Can’t You Feel the Love Tonight” by Elton John
● Bob Gao on piano playing “Piano Sonata in C Major K.545 by Mozart)
● Resonance singing acapella to “All My Loving” by the Beatles
● Greg Hebert with jokes
● Blue Devils Color Guard with “This is Me” by Keala Settle
● Brennan Magoon singing “So Happy Together” by The Turtles
● Galactic Orchestra playing Rocky’s theme song “You’re Gonna Fly Now.”
All the finalists did a fantastic job with their performances, and we couldn’t be more proud of them. We can see that they had all put in a lot of effort into their performances.

For the first time in our talent show history, the audience had the opportunity to rate each performance and choose their favorite performance at the end. The performance with the most votes received the first ever People’s Choice Award, which consisted of a trophy and $100 cash. Allowing the audience to vote encouraged them to stay engaged and excited. The attendees were all very active and enthusiastic. Many left encouraging, warm and positive comments in the Zoom chat, the total of which summed up to more than 300.

When the final performances were completed, Keller sent the judges off to decide this year’s top 3 winners, as well as the winner of the Showmanship Award. During this time, we broadcasted the audition videos of the 10 honorable mentions. Usually, the honorable mentions have the opportunity to perform their audition piece on stage at the Santa Clara Convention Center, but due to the pandemic, we decided to broadcast their audition video instead. All the honorable mention performances were entertaining and fun to watch. A tear-jerking moment during this segment was the memorial video played as a tribute to one of our honorable mentions, Audrey Chu, who had passed away in March at the age of 17. She had auditioned for the talent show for the past 4 years and finally made it as an honorable mention this year. Her passion for singing, dancing and acting was evident in her dance performance, and she will always be remembered.

Next, Keller introduced a special guest, Stephen Prutsman, one of our audition judges, to present the five Piano Awards for this year. These are presented to all the piano finalists and honorable mentions, and the five awards went to performers Alice Jen, Julian Huang, Bob Gao, Darren Ko, and Brandon Wong.

Finally, the moment that everyone has been waiting for, the judges had returned from deliberation and had the winner list in their hands, but before the winners are announced, Matt Keller had a chance to speak to one of the judges, Chris Showerman, who gave a few words about this year’s finalists. After that, Keller welcomed Angela Sohn to announce the winner of the Showmanship Award, Christian Magoon. As his prize, he will receive a trophy and $100. 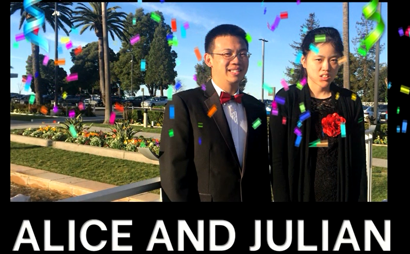 Then, Nancy Bargman announced the second winner, acapella group Resonance. Lastly, Jude Morrow announced the third winner, singer Frank Prenot. The top 3 winners will all receive a trophy and $500. We once again offer our congratulations to all the winners!

The Special Needs Talent Showcase ended successfully with over 200 computers logged into the call, but we estimated that actually 500 to 600 people watched the event since many families only logged into one computer with multiple family members watching. We received over 300 positive live comments over the course of the event. After the show ended, we uploaded the video of the event onto YouTube, and it received another 200 views.

Following the showcase, we received wonderful feedback from the attending families. One said that the event was “medicine for the soul” during this time, while another said that it gave them hope that we will overcome the pandemic together. We are delighted that this event was able to bring so much joy and hope to everyone and bring everyone together.

You can watch the entire Special Needs Talent Showcase on YouTube: