Fremont 4th of July Parade is back! Prior to July 4th weekend, we received notice from an FCSN announcement about the coming parade. It was quite unexpected as Fremont has not held the parade since the beginning of the pandemic over two years ago. Somehow, I felt this year’s celebration was somewhat different.  I questioned myself, “are we ready for such a festive event?” A day before the parade, Dora Chou and Anna Wang sent out text messages reminding everyone of the event, but we had no idea how many people would show up.

July 4th turned out to be a nice day for the parade. On a mild and cloudy morning, I drove my family to our usual parking spot near Fremont City Center. I was surprised that there was ample parking space which was not the case two years ago. We walked our way along Paseo Padre Blvd, and there appeared to be less crowd gathering than previous years – which was expected. We walked past the review stand just as Sneha Kaur Kamboj, a rising sophomore at Washington High School, was introduced. She sang the national anthem, we all stopped and listened – it was special because we have not heard it sung in person for over two years. Afterwards, it was announced that the parade was officially ready to begin. 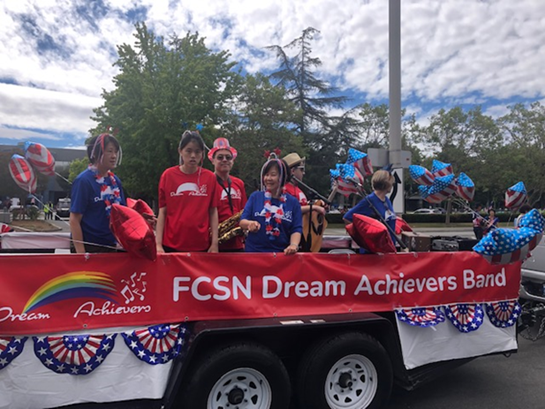 At the next block, we were handed bottles of water from a group of Sikh volunteers. I remember that during one of previous parades, the temperature was in the 90s, and I thought these volunteers provided the best and most needed community service on 4th of July. We hurried up and joined our group behind CBC (Citizen for Better Community) and CBC Toastmasters. We have been partnered with CBC for many years as part of their team at this annual event.  Overhead, looking up to the cloudy sky, we saw the California Beech Boys in action as they performed their formation flying with trailing smoke. We counted nine planes in total, it was an amazing sight!

As we were standing there behind our float on Stevenson Blvd., waiting for our turn, we got to watch the parade as other teams passed in front of us. There were fire engines, buses, marching bands, antique cars, and floats, representing all kinds of organizations; and of course, there were the usual familiar groups of Shao Lin Kung Fu and Star Wars stormtroopers led by a flag waving Chewbacca.

Our group consists of about 50 FCSN members, staff, and friends. We marched behind FCSN’s Dream Achievers Band. The Band had their instruments set up on a flatbed trailer, towed behind a truck. When it was our turn to join the parade, they started playing YMCA, and some people danced to the tune. Following the band, our team moved along and waved our flags. As we made the right turn at Paseo Padre Blvd., I was surprised by the size of the crowd as they filled up both sides of the street – it was definitely a larger crowd than I expected. We were warmly received by the bystanders: they smiled, clapped, and waved back at us. At the review stand, FCSN was announced and introduced to the audience as one of the bigger groups in the parade. At the next light, we turned left onto Capitol Ave., and we soon reached the end of the parade route. We were told that there was an afterparty at the event center, and many of us walked there to join the party with live music, food trucks, and community non-profit booths.

After two years of sheltering, this year’s event certainly feels a little bit different. People wanted to come out and meet others, as we all want to bring some normalcy to our lives. I felt good after the parade: It is a great time to show that we want to continue to support each other and bring the community together. 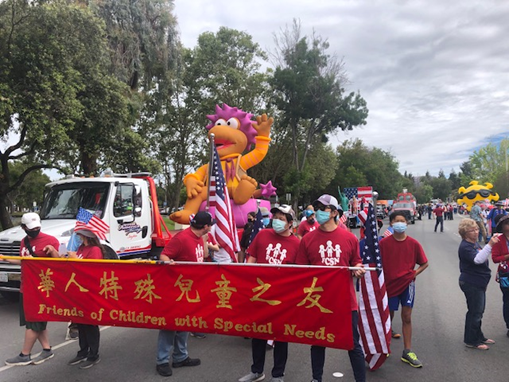